Trying To Keep A Job When You Have BPD (Guest Post)

I once had a CPN (Community Psychiatric Nurse) say to me that it was very unusual for someone with Borderline Personality Disorder (BPD) to hold down a job.

At first, I took offence. Why wouldn’t I be able to work? I’d worked my whole adult life up to that point.

Then I had a breakdown, attempted suicide, and lost my job (well, I was ‘made redundant’ while I was in the psychiatric unit… but that’s another story).

The truth is, people with BPD do face barriers when it comes to keeping a job; a topic about which Emily has kindly offered to write.

Here is her story.

“When I was 17, I got my first job. My auntie’s neighbours were owners of a hotel, pub and restaurant. Every weekend I would stay at my auntie’s house so that I could work at the restaurant.

Back then, I wasn’t aware of my mental health conditions. I had previously struggled with panic disorder up until the age of 15 but I thought I had got over that. My parents didn’t believe in mental illness. I was extremely shy at the time so I guess they thought that throwing me into a job would make me get over my ‘shyness’.

I worked in the restaurant and when customers walked in, I was told to greet them and seat them at a table. I remember the horrible anxiety when they walked in. I stumbled over my words and couldn’t make eye contact. I struggled to even just ask a table whether their food was okay and frequently struggled with my memory, such as mixing up my orders. I would get so overwhelmed with emotions that I would hide in the toilets and cry.

I started self-harming before work to get me through. When the boss criticised me, I couldn’t cope. The more I worked, the more overwhelmed I got and the more mistakes I made as a result. I tried to avoid work one day and my auntie forced me to go in. I turned up with tears down my face and that was the day I got fired.

Despite that, my family were still adamant that I was just a bit shy and forced me to apply for more work. I worked another job as a waitress, and they cut my hours to force me out.

I eventually realised that I had social anxiety disorder, so decided to try and work jobs with minimum social interaction. I worked at a dog’s kennel for a month and still got fired. I got too overwhelmed by all the responsibilities and couldn’t cope. The loud sounds of the dogs barking created constant anxiety and I had a strict boss, so was always worried about her criticism. Eventually, I got fired because my anxiety made me too forgetful and I forgot to lock the gate that prevented all the dogs from escaping multiple times.

My next job was at Domino’s in a busy city centre. The staff were all tough-skinned and the work was fast-paced. I worked on the phones and could not cope at all. I was missing that layer of tough skin like the rest of them. It wasn’t until a co-worker started complaining to others about me that I completely lost it. I threw my apron across the room and ran into the toilets. I burst out crying and never came back again. I was fired because I sent an angry email to my boss for the way he and everyone else treated me.

Anyway, I will not go on because unfortunately, I have been through a number of jobs where my employment often only lasted a month or two. For a long time, I thought I just had social anxiety, which is probably what it looked like. I had multiple treatments for it which never really worked. It wasn’t until my diagnosis of BPD that I realised what the core problem was. My BPD was actually causing the social anxiety. I feel absolutely everything. And when I am surrounded by things that set off emotions then I feel unable to cope. I have also realised that I am afraid of others setting off my mood swings.

At the moment, I have kept a job for five months, which is the longest time ever. The reason I am better able to cope with this job is that I usually work alone. However, I have had a few incidents which have set me off. For example, I forgot to take my mop into work (I am a cleaner); I told my colleague and she seemed angry. I almost ran away and quit because of that. Also, sometimes I have to work with my other colleagues and one of them is really bossy and sets me off because of it. I try and keep my composure, but I feel my brain shutting down. I cannot concentrate and desperately want to do something self-destructive. I sink into a severe depression and have to keep working anyway. It is suddenly like someone has strung a heavy anchor around my body and I have to try and conceal it.

Even though I have gained a bit of success with this current job, I am extremely depressed because I have a degree and am in a minimum wage job. I have a degree in media and communications but don’t feel I am able to progress from my current situation at all. This is because most of the jobs I can obtain with this revolve around lots of human interactions (e.g. sales, admin etc.). I feel I will be extremely unhappy in a role such as this as from previous experience I know that it is constantly going to trigger me and peel the non-existent layer of skin that I have.

However, this doesn’t mean that you are doomed if you have BPD. Some people can be very high-functioning and have very successful careers (e.g. Marilyn Monroe). This is just my experience of trying to keep a job when I currently have a very low-functioning type of BPD, which many people may relate to.”

A huge thank you to Emily for telling her story. You can find her on Twitter or on her blog, My Messed-Up Mind.

Do you have BPD? What has been your experience of employment? Have you faced similar barriers to Emily? Let me know in the comments.

If you have been affected by any of the issues raised in this blog, please see below for some useful links. 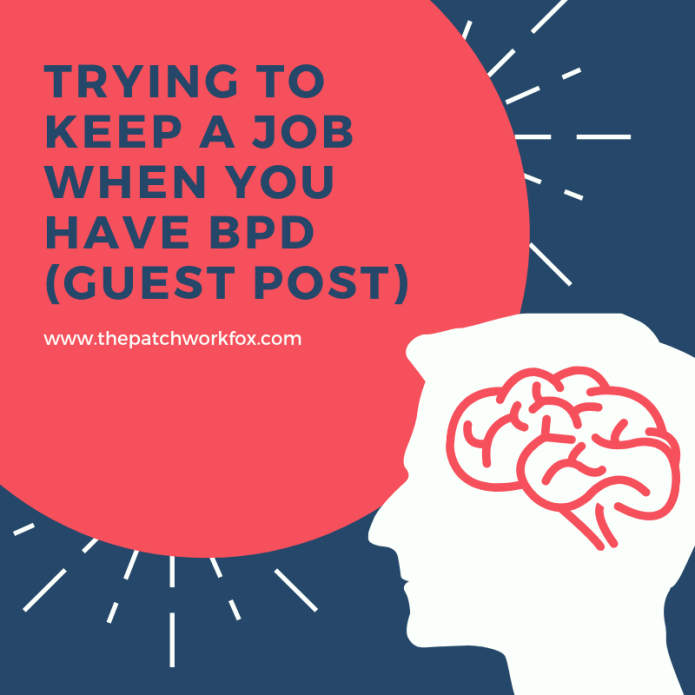 How To Cope With Nightmares