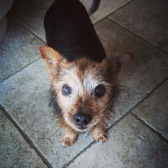 Alfie (a.k.a. Alfred, Alfredo, Fred, Freddo, Freddy, Frederick, Frederico)  is our family dog. He is almost 17 years old and he’s a Jack Russell cross. We sometimes call him Barrel-Boy because he’s a bit pudgy and round like a little barrel. 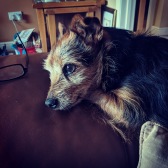 Alfie lives with my parents, and he came into our family when he was about 17 months old. His previous owners didn’t want him anymore and they were going to take him to the RSPCA. It was my uncle who heard about this, and he initially rescued him but could only take him temporarily, so he contacted my mum and although my parents already had a dog at the time (Molly) and they had not intended to get another dog, they couldn’t stand the thought of him being dropped off at a shelter, so they relented, and we went and picked him up. 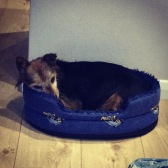 We had been told by his previous owners that he was terrible with other dogs and children, but the second we picked him up, we knew they were lying. He instantly became Molly’s best friend, and he is the most loving dog I have ever met. Straight away he accepted that Molly was in charge, and he always deferred to her for instructions about what to do and how to behave. He’s always excited to meet people and just wants to cuddle all the time. 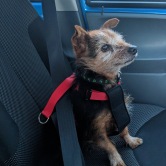 When Molly passed away, he was lost for a while. She was his big sister for many years, and he wasn’t quite sure what to do without her. But after a while, he settled into being the only dog in the house, and as he got older and a bit slower, I think he quite enjoys being our special boy all by himself. Now that my parents are retired, he barely spends a minute alone, so he gets attention all the time, and he just loves to snuggle up and nap next to whoever is there.

If mum and dad go on holiday, Alfie usually goes to stay with my grandparents, who absolutely adore him. My Grandma insists on cooking him chicken, bacon and gravy for his lunch (he comes home even more barrel-ish than usual, and has to do a few extra walks for the next couple of weeks!), and he likes to wedge himself in next to my Grandad in his armchair and just snooze whilst getting fuss. 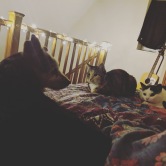 Recently there was a time that my grandparents weren’t able to look after Alfie while my parents were away overnight, so he came to stay with me and my kitties. We were slightly apprehensive about how he would be around them, but he was just his same, loving self, and thankfully my girls were accepting of him and let him come and sleep on our bed with us. He had a lovely time, but he was glad to get home when my parents came to fetch him (he’s a mummy and daddy’s boy, after all).

Alfie came into our lives quite by accident, but I couldn’t imagine us not having him. He wasn’t wanted by his first owners, but I’m quite glad that he wasn’t because I’m sure he’s had a much better life with us in his forever home, and he’s definitely had a massively positive impact on our lives too. 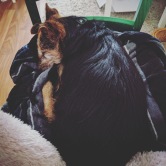