All By Myself: Mental Illness and Living Alone

***Trigger warning: This post includes descriptions of self-harm and impulsive behaviours. Please do not read on if you are at risk of being upset or triggered by these topics.***

One of the main things we hear in this new age of mental health awareness is “you’re not alone”. For many, this is true. We may have partners or housemates around us to support us when we are too depressed to leave our beds for days or weeks at a time. Someone to bring us a cup of tea and sit with us on the sofa while we cry.

But some of us don’t have that, because we live alone. I’m one of those people.

I’ve struggled with mental illness since I was a child, but as a high-achieving, high-functioning perfectionist, I kept things ticking over relatively well. I went to university, I got a job, I got a promotion. I had a long-term relationship, and although it was far from perfect, I knew I was never really alone. So when all that came crashing down and I found myself truly alone for the first time in my life, I didn’t quite know what to do. I knew that being in my mid-twenties meant I “shouldn’t” be relying on my parents, and to be honest, we were about ready to kill each other living under the same roof. So I packed my stuff and moved out.

I’ve lived alone for three years now. I’d lived away from my parents in the past, but always with housemates or a partner, so when I finally moved to live on my own three years ago, it was a massive shock.

There were some great things about living alone. Fancy eating ice cream at midnight? Do it. In the mood to dance around the house to loud early 00s pop punk? Babe, you do you. Fighting over which tv show to watch? I don’t know her.

And for a while, things were okay. I was enjoying my freedom, feeling like a proper grown-up. I had a pretty good job and my own place – I was nailing this being an adult thing.

Then my mental health started to deteriorate again – worse than ever before. I didn’t know it, but I had undiagnosed Borderline Personality Disorder, and things were about to get messy.

My house felt cold and I sat in my chair, wallowing in the silence, letting my thoughts boil in my blood until I had no choice but to slash my skin and drain them out. My chronic feelings of emptiness led to dangerous impulsive behaviours, some of which I’m still too embarrassed and ashamed to admit. I was self-harming regularly and I was emotionally unstable. I slept for days at a time, unable to bring myself to eat, then when I did eat, I’d binge on junk food. I flaked out on plans all the time and lost most of my friends. I started to lose it at work because I just couldn’t maintain the facade of being okay any longer.

I’m going to skip over a large part of the story here because I don’t want to talk about it yet. Maybe I will one day.

Two years have passed. I’d just got out of the hospital after yet another failed suicide attempt, and my house was colder than ever. When I lay awake at night, crying and hating myself, no one was there. No one to give me a hug and tell me it would be okay. No one to make me a cup of tea and let me talk it out. I’d heard all the promises… “if you need me, text me”, “you’re not alone”… but I didn’t believe it. No one wants to get a text at 3am, I thought. No one needs this.

Then I started group therapy. I hated it. I didn’t know anyone. I was awkward and shy and I didn’t want to talk about my problems in front of other people. I wanted to hide. But as time went on, I softened and started to let them in. I even made a friend. Then I made two. Then three.

I joined Twitter and started talking openly about my life and my experiences. I made more friends. I was talking to people who truly understood me; people who saw the world the way I see it.

Soon my house didn’t feel so cold anymore. It wasn’t that my friends came to my house, because none of them do, but I suddenly realised that I truly wasn’t alone. There were people in the world who thought like me. The reason I couldn’t find them before is that I was pretending to be someone I wasn’t. How are people supposed to see the real me if I don’t show them?

People started checking in with me. Making sure I was okay. Asking how my day had been and genuinely wanting to know the answer. And I started to tell them.

My problem wasn’t living alone. My problem was living a lie. Trying to convince the world that I didn’t have any problems. Hiding away in my little self-imposed prison, convincing myself that I was alone because the real me wasn’t acceptable to anyone else. But I was wrong. I am acceptable just as I am. No mask, no show, no facade.

But I’ll never be lonely again. 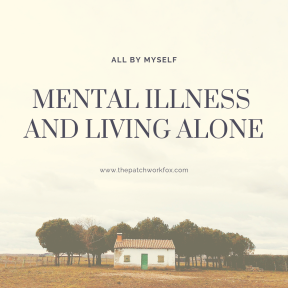 It’s Been A While

Where I've been and where I am now.
It’s Been A While