Firsts: A bit of nostalgia

Firsts are often important moments in our lives. I thought I’d put together a list of some of my firsts and a bit of background about them.

What firsts stand out in your mind? Let me know in the comments. 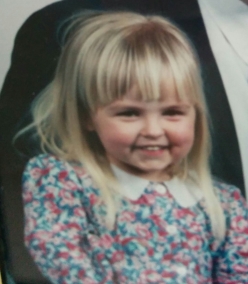 Me as a kid

My earliest memory is of being taken to the hospital to see my baby brother who had just been born. I was about two years old and I remember being picked up and held over his incubator to give him his first teddy – a white bear he later named Snowy.

I remember being in playschool and we had a visit to the primary school, ready for us to join in September. My mum had dressed me in a nautical-style blue-striped t-shirt, and I was sporting particularly adorable pigtails. I remember they had TWO sandpits inside. Dry sand AND wet sand. The wet sand was amazing for sandcastles. That shit was cool af.

My first pet was a goldfish who I named Cleo, after the goldfish from Pinocchio. It lived in a tank with my brother’s goldfish, whose name changed every week depending on which footballer he liked at the time.

My first CD was a Disney compilation. I kept it for years. I think I only just rid of it, actually.

The first time I tried swimming without armbands was on holiday with my parents and my brother. My dad got in the pool with me and walked around with his hand under my chin because I was scared of my face going underwater.

I actually had three first boyfriends all at the same time. They were all friends, and all knew they were all my boyfriends. I was five, and that was my dating peak.

I was 14, and it was with my first “real” boyfriend. I immediately cried because I thought I did it wrong. Did I mention I’m incredibly awkward?

My first job started when I was about 14 and lasted until I was either 17 or 18, I can’t exactly remember. I was a money collector for a milk delivery company, so I’d go door-to-door to all the customers and collect their weekly payment.

My first job post-university was as a library assistant in a secondary school. I’ve always been an avid reader and I loved this job, so much so that when the chance for a higher position (library manager) at another school came up a couple of months later, I went for it. I didn’t expect to get it because I was so inexperienced, but I did. So, I wasn’t at my first job for very long, but it did inspire me to push myself and go for things even if the outcome looks unlikely.

I think that’s enough for now, but I may do a post with some more “firsts” in the future!

Did any of my “firsts” resonate with you? Maybe we had very similar or wildly different experiences? Let me know in the comments below.